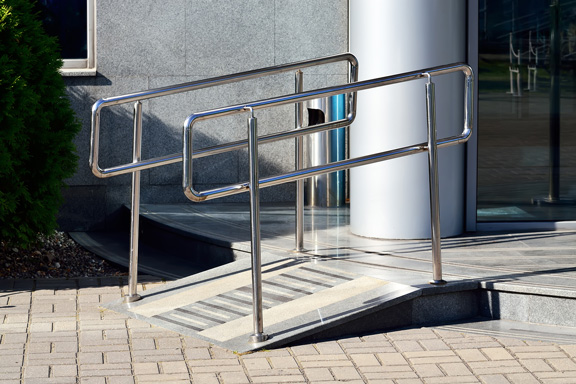 An accessible physical environment benefits everyone, not just persons with disabilities. Measures should be undertaken to eliminate obstacles and barriers to indoor and outdoor facilities including schools, medical facilities, and workplaces. These would include not only buildings, but also footpaths, curb cuts, and obstacles that block the flow of pedestrian traffic.

An accessible government building is one, where persons with disabilities have no barrier in entering it and using all the facilities therein. This covers the built environment – services, steps and ramps, corridors, entry gates, emergency exits, parking – as well as indoor and outdoor facilities including lighting, signages, alarm systems and toilets. Identifying accessible buildings requires annual accessibility audits that determine if a building meets agreed upon standards. Once a building is deemed fully accessible, an annual audit is not necessary, but should be required for any proposed changes to the structure or systems contained therein. A full audit can then be done on a less frequent basis. Standards of accessibility should be as consistent as possible with international standards, such as those of the ISO, taking into account the local context. In regards to the built environment, ISO 21542:2011, Building Construction – Accessibility and Usability of the Built Environment, delineates a set of requirements and recommendations concerning construction, assembly, components and fittings. Target 1.1: Conducting accessibility audit of at least 25-50 most important government buildings and converting them into fully accessible buildings in the selected 50 cities. Target 1.2 : Converting 50% of all the government buildings of National Capital and all the State capitals into fully accessible buildings Target 1.3: Conducting audit of 50% of government buildings and converting them into fully accessible buildings in 10 most important cities / towns of all the States (other than those, which are already covered in Target 1.1 and 1.2 above)

Transportation is a vital component for independent living, and like others in society, PwDs rely on transportation facilities to move from one place to another. The term transportation covers a number of areas including air travel, buses, taxis, and trains.

Target 4.1: Ensuring that 25% of Government owned public transport carriers in the country are converted into fully accessible carriers by March 2019

Access to information creates opportunities for everyone in society. Access to information refers to all information. People use information in many forms to make decisions about their daily lives. This can range from actions such as being able to read price tags, to physically enter a hall, to participate in an event, to read a pamphlet with healthcare information, to understand a train timetable, or to view webpages. No longer should societal barriers of infrastructure, and inaccessible formats stand in the way of obtaining and utilizing information in daily life.

This target will ensure conversion of public documents published as of a specified year and all current websites meeting the relevant International Organization for Standardization (ISO) criteria, that are found in ISO / IEC 40500 : 2012, Information Technology – W3C Web Content Accessibility Guidelines (WCAG) 2.0. Public documents refer to all documents issued by the national government as well as all subnational documents. They include all publications such as laws, regulations, reports, forms and informational brochures. Target 5.1: Conducting accessibility audit of 50% of all government (both Central and State Governments) websites and converting them into fully accessible websites Target 5.2 : Ensuring that at least 50% of all public documents issued by the Central Government and the State Governments meet accessibility standards

The proportion of public television news programmes that meet agreed upon standards of daily captioning and sign-language interpretation. Public television refers to programmes that are produced, funded or subsidized by the government. Target 7.1 Developing and adoption of national standards on captioning and sign-language interpretation in consultation with National media authorities. Target 7.2 Ensuring that 25% of all public television programmes aired by government channels meet these standards. Accessibility is about giving equal access to everyone. Without being able to access the facilities and services found in the communities, persons with disabilities will never be fully included. Accessible India Campaign will seek cooperation of all Central Government Departments/Ministries and State Governments to seek “accessible police stations”, “accessible hospitals”, “accessible tourism”, and “accessible digital India” etc. Organisations, both public and private are encouraged to use their CSR funds for building accessible infrastructure. They may adopt projects of their interest e.g. making a hospital accessible or creating an accessible toilet in a school. Once an organization decides to adopt certain number of projects from this portal, they would be entitled to become the “Organizational Stars” and name and logo of Organization will appear on the home page of Accessible India portal. These organizations will also be rewarded and recognized in annual award ceremony of the Department of Empowerment of Persons with Disabilities, Ministry of Social Justice & Empowerment, Govt. of India. To know more visit http://accessibleindia.gov.in/ 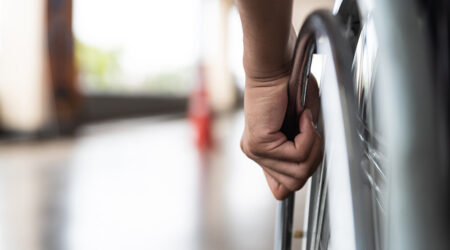 Recognizing that the Persons with Disabilities constitute a valuable human resource... read more 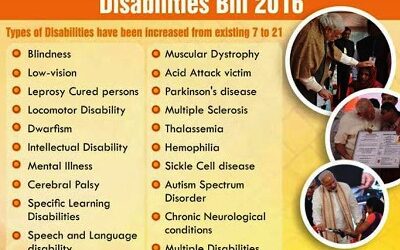 The Rights of Persons with Disabilities (RPwD) Act, 2016